Today, finally, I got around to opening my Diwali gift from Aditya Gupta, the Husqavarna Viking , Pfaff and Handiquilter man in India, who has become a dear friend over the years. Actually, the package had arrived more than a week ago, but I had not been able to even open it. October, so far, has been a crazy time for me, with two emergency trips to the hospital with my daughter. She is better now, thank you!

I had to share the pictures of this wonderfully thoughtful gift with you immediately that I saw it myself.


There is this bag in which I can store my Topaz 30 sewing machine when I am sewing on my Opal 690Q, or carry it along with me when travelling, for it also has a detachable telescopic strolley. The bigger bag, Aditya tells me, is for the embroidery unit; I think it may be able to fit in my quilting table as well, which is difficult to store when not in use. And don’t you just love that smart red? Here is another pic; as you can see, the machine carry bag has a sleeve which slides into the trolley and holds it there. The larger bag has a similar sleeve.
What better gift could a sewist ask for?

Finally in Devanagari script, my poem about the games young rays of the sun play on a morning in early winter, written in November 2011! An English translation called ‘Games on a Winter Morning’ was one of the first few posts written and posted on my blog!

(This poem, about the games young rays of the sun play on an early winter morning, written in November 2011, was originally posted here in the Roman script in February 2012. I translated it into English for my son, here! With Hindi transliteration now available from my iPad keyboard, I finally got around to posting it in the Devanagari script)

A salesman was here today
Selling vacuum cleaners.
They clean everything,
He said.
The pelmets, the curtains,
And of course, the carpet;
Even the bedcover, the walls,
And that place under the bed
Which I can’t reach.

I wonder
If it can sweep aside
The cobwebs that blanket our lives …
… yours and mine.
Will it help me
Reach that corner
Of your heart
Which I cannot touch?
I wonder,
As I wait for you
To decide
If we need that vacuum cleaner..

About the poet – I found this and a few other poems in the diary of an 18-year old girl a couple of years ago.  She would rather remain anonymous. Actually, she can’t remember writing them in the first place and thinks they are rather inane. So when I thought they should be recorded somewhere – whatever their worth – she reluctantly gave me  permission to share them here, albeit in my name.

About the poem – She was obviously a fan of ‘Gone With the Wind’.

About the photograph – Credit all mine! Taken on a trip to Palampur in Himachal Pradesh, India.

Note: There is something hauntingly romantic about old ruins. And when these are situated in a village which is supposed to be the ‘most haunted place in India’, one’s imagination runs wild. A memory – glimpse of a veil, a whiff of a scent, a touch of the breeze – the birth of a poem, dedicated to Bhangarh, a small village in Alwar District in Rajasthan.

(I like to write my poems in Hindi as well as English, to reach out to both the audiences! )

A couple of months ago,  I visited a stunning architectural wonder, Chand Baori, an ancient step well from the 9th century. This is situated in Abhaneri village in Alwar District of Rajasthan, India, about 100 kilometers from Jaipur.

This is what Wikipedia has to say about it –

Chand Baori is one of the oldest and most attractive landmarks in Rajasthan. It was built by King Chanda of the Nikumbha Dynasty between 800 and 900 AD and was dedicated to Hashat Mata, Goddess of Joy and Happiness upon completion.

The state of Rajasthan is extremely arid, and the design and final structure of Chand Baori was intended to conserve as much water as possible. At the bottom of the well, the air remains 5-6 degrees cooler than at the surface, and Chand Baori was used as a community gathering place for locals during periods of intense heat. One side of the well has a pavilion and resting room for the royals.

I took a lot of pictures of the gorgeous sculptures in the nearby Harshat Mata temple too. Watch out for the post!

I am going to get more than just a bit boastful today! My blog just reached 100000 all-time views from 35000 visitors from around 110 countries, a few of which I barely knew even existed!

When this blog started off four years ago,  I did not know if anyone was going to read it. It had no agenda, except a need to share with the world my thoughts and musings and the things I enjoy doing. At that time, that included poetry, painting, embroidery and quilting, in no particular order. I am being told now to make an exclusively quilting blog, but I am not so sure. Agreed, in these years, quilting has taken over much of my life and the blog has come to reflect more and more of this. Yet, it remains to me a medium of sharing with you all that I create –  ‘This and That…Some Rhyme, Not All Reason’!

May I thank all of you who visit my blog and stay awhile, perhaps just to look around or download a few patterns which you like! Nothing gives me a greater high than seeing how you interpreted my designs. So, I would love it if you also shared your thoughts with me here and pictures of what you make using these patterns on my facebook page.

So, good morning from India, may you have a wonderful day!

Haven’t I met you before,

From across a closed door?

In a verse still to be written?

In a word that hung

On my lips, unsaid

In a book I haven’t read?

In a memory unlived?

In the smoke of a fire

Which never was lit?

In a scent that faded

Ere I even smelt it?

In a touch so soft

I haven’t met you, are you sure?

In a life never lived before?

Note: There is something hauntingly romantic about old ruins. And when these are situated in a village which is supposed to be the ‘most haunted place in India’, one’s imagination runs wild. A memory – glimpse of a veil, a whiff of a scent, a touch of the breeze – the birth of a poem, dedicated to Bhangarh, a small village in Alwar District in Rajasthan.

I had an amazing day today and I didn’t even touch my quilting.

Diwali, the Festival of Lights, is just around the corner and we decided, as a part of the annual cleaning spree, to finally have a look at the five large cartons and trunks of what we thought were old official papers to be sent for pulping. And look at what I found hidden there for the last fifteen years since they were packed!

First, a folder cover I embroidered at the age of twelve ( it was really filthy and has gone into the wash), but it was not the ugly folder that was important. In a pocket in that folder was a picture of my daughter, when she was just ten days old! How precious is that!?! We also discovered a bunch of these photographs taken on a holiday to South India, travelling from Delhi. I don’t remember seeing these, ever. We probably got a transfer out of Delhi immediately thereafter; these were packed and the wooden box never opened till today.

That photograph right on top has a story, which I love to tell. We were boating on this beautiful lake in Ooty when, right in the centre of the lake (probably right here), my husband, Rajeev, dropped something into the water. We later discovered that it was the key to the main door of our flat back home. As we landed home late in the evening when no locksmith was available, he had to break the door open with a kick (or several). You can imagine how effective this tale is in shutting him up when he is being particularly nasty about my carelessness, which is actually just the natural preoccupation of a creative mind. Or so I would like him to believe!

I also found my collection of Georgette Heyers, about 20 of them! I have since replaced a few, as I thought they were lost forever! My dozen or so volumes from the Pelican series on Psychology, Sociology, Anthropology and Psychiatry, which I had scrimped and saved to buy when doing my Masters and also believed were lost… Freud, R.D.Laing, Durkheim…do you suppose a library would want them?

I also found the book I had written for children when I was still in college and which was published in 1979 by the Children’s Book Trust, New Delhi. I had won the National Award for the Best Children’s Literature in English for this and I didn’t even have a copy!

I discovered a whole lot of letters and cards, including one drawn by a cousin when he was 7 years old. We lost him to a road accident some years ago, 3 weeks before he was to be married. Several letters – some from when we were in school together – from someone who was my best friend for forty plus years, but does not wish to talk to me now.

Let me end this happy-nostalgic post with a few pages of the first ever school project, on ‘My Family’, done by my 6-year old!  We are all there, the Dad – standing in front of his brown Maruti car – who plays with him, the mother who cooks for him,  the uncle who comes back home late from the factory every day, tha aunt who is a lecturer, the sister who loves him, brother ( cousin) who loves to eat chhole-bhature, the grand mom who tells him stories ( I wonder why there is a cat on her saree?), the grandfather who writes letters…

By the way, we also found a letter of advice written by the same grandfather to my son when he had just entered medical school.

So these were some of the lost treasures I discovered today.  Tell me, how does one throw away these things?

Patchwork of My Life

Patchwork of My Life

A step back in time 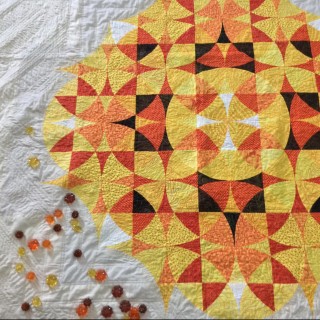 From Doodle to Design

utorials about WordPress, blogging, social media, and having your say on the web.

Spreading warm wishes one quilt at a time...

Moments of Quiet: Embroidering My Tale